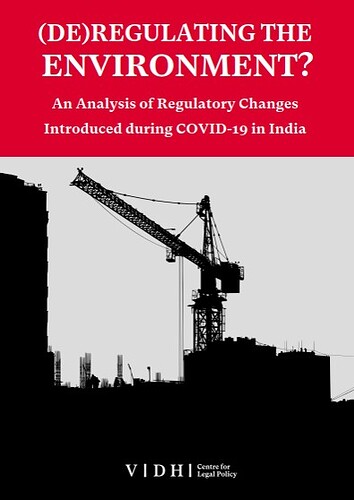 An Analysis of Regulatory Changes Introduced during COVID-19 in India.

This study is aimed at systematically examining the nature and scope of regulatory instruments (“instruments”) such as orders, office memorandums (“OMs”), circulars, letters, and notifications, issued by the Ministry of Environment, Forest and Climate Change (“MoEFCC”) under the Environment Protection Act, 1986 (“EP Act”) during the COVID-19 pandemic. The duration selected for this study is 11th March 2020 to 22nd March 2022.

In the introductory chapter (Chapter 1), we discuss the background and objective of this study. Chapter 2 elaborates the powers available to the Central Government under the EP Act to regulate activities in the interest of environment. It also introduces the theoretical foundation of the two-pronged test applied in the study to analyse these instruments. First, under the administrative law lens, we assess whether the instrument is likely to violate the doctrine of ultra vires i.e., the instrument runs contrary to the EP Act or is introduced in excess of the power delegated under the Act. Under the same lens, we also assess whether the requirement of public consultation has been dispensed with by the Central Government. Second, under the principles of Environmental Rule of Law (“EROL”), we evaluate whether the instruments are regressive, i.e. they backtrack on environmental safeguards and rights protected under the law. Under EROL, we also examine whether these instruments weaken or affect the integrity of the independent bodies that administer environmental law in the country, and finally, whether this information on regulatory changes in environmental law regime is easily accessible to the public.

In Chapter 3, we have explained our research methodology and the various aspects adopted for this study, which include the sources of the information collected, the rationale for selecting the indicators used for analysing the instruments and limitations of the study. The results of our analysis are provided in Chapter 4. In Chapter 5, we discuss some selected case studies from the data to have a deeper dive on major concerns.

In Chapter 6, which is the concluding chapter, we summarise our findings and conclude that the government weakened the existing legal safeguards for environmental protection on several occasions during the pandemic. We also recommend that the Government of India must constitute an independent committee to review all amendments and office orders brought in the environmental laws during the study period and withdraw all such instruments which are found to be ultra vires and regressive. A summary of the key findings from this study is provided below.